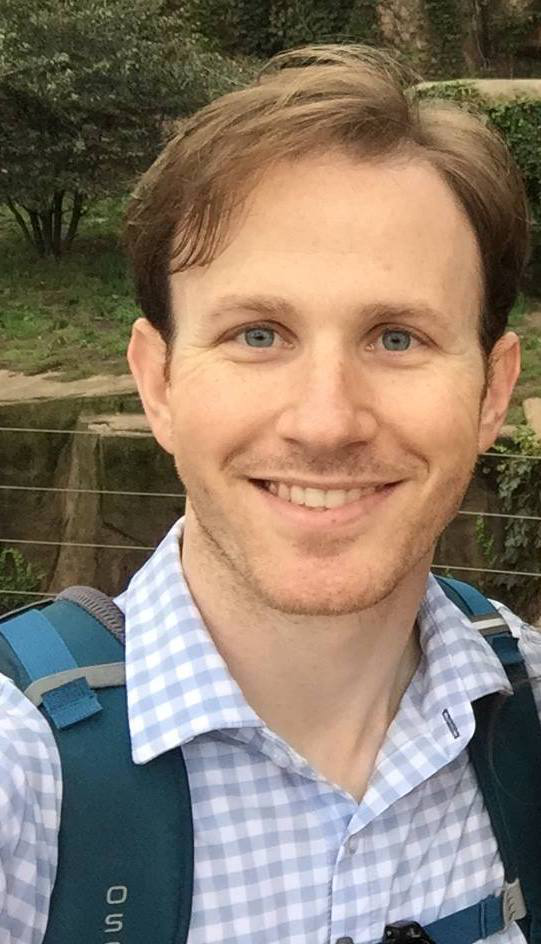 In the past, I have worked to build predictive models of protein evolution. I was particularly interested in the way protein structure constrains and determines evolution, the evolution and epidemiology of viruses, the way evolution and epidemiology are connected, the tools and models that are used to study evolution, and how large datasets can be used to forecast the emergence and evolution of viruses. When time allows, I try to continue to work in this field.

Here is a word cloud generated from the text of my publications. I think it does a good job outlining what I worked on during graduate school, postdoc, and medical school. 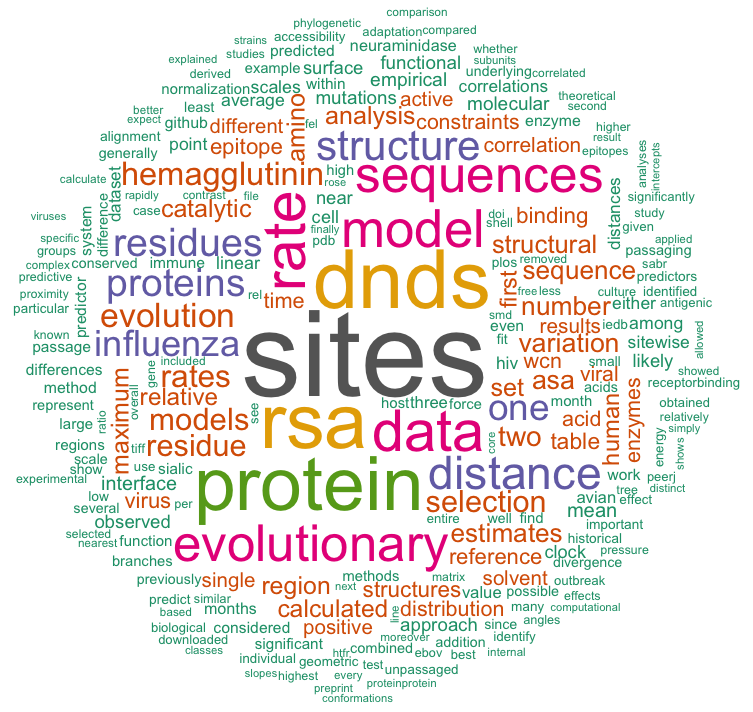 In addition to my scientific research interests, I am interested in scientific computing, open science, and computational statistics. I know and program in Python, R, Bash, and C++ as well as some intermittent Mathematica, Matlab, and Tcl/Tk. In addition, the Wilke lab maintains a public git repository of the one-off tools we’ve produced for various projects.

If there is any piece of software that seems related to what we do but is not in the repository I may have it laying around or it may be in a github repository for one of our papers.

Currently I’m a medical resident. I try to be as involved as I can be with research. My current interests revolve around chronic disease management and care in indigent populations.

Past Research in the Wilke Lab

By combining techniques from bioinformatics, statistical mechanics, biochemistry, molecular biology, and genetics it may be possible to predict the path of viral escape from host challenges. To accomplish this 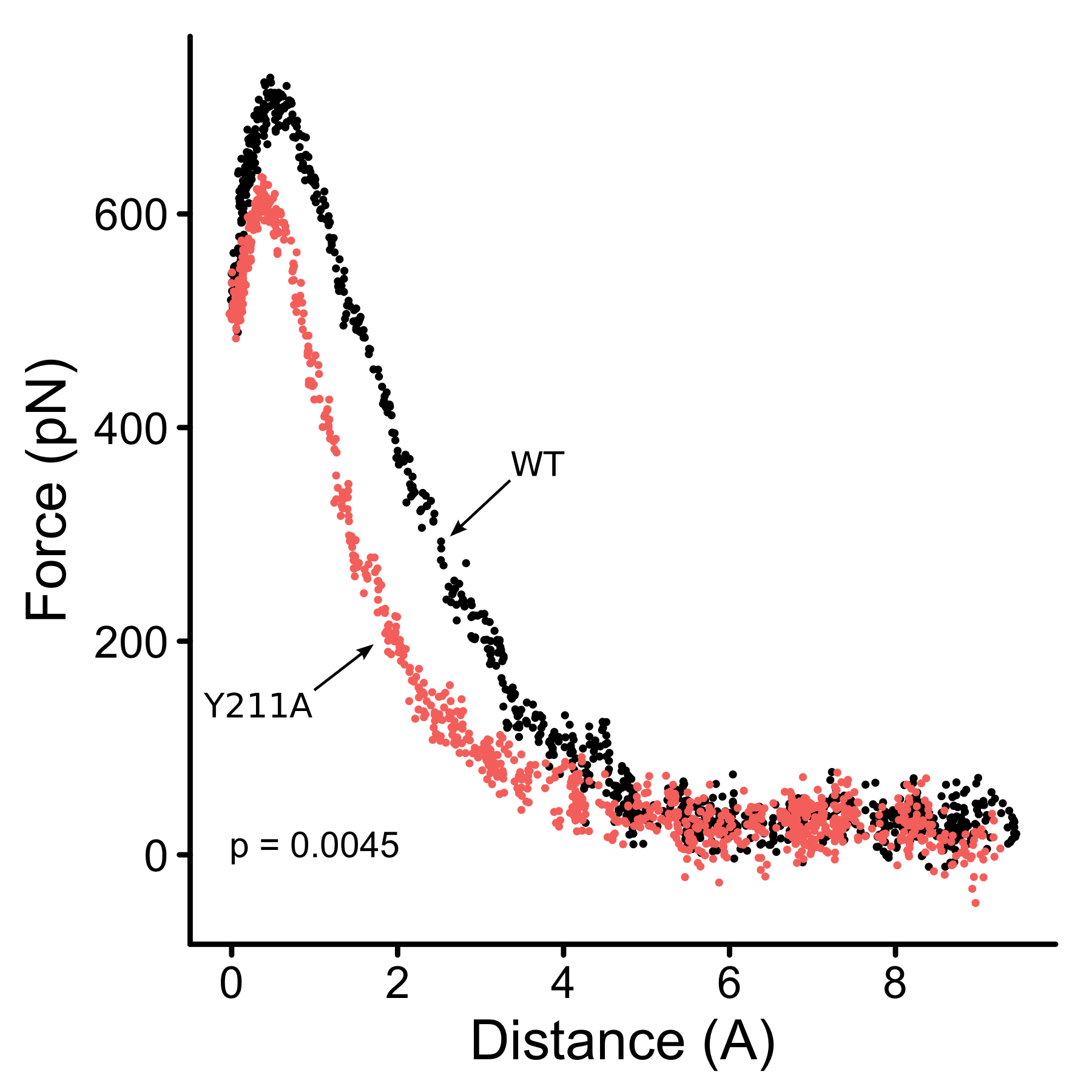 we can narrow the field of possible mutations with evolutionary intuition and bioinformatics, build a data set for training an in silico evolutionary algorithm, and test our resulting predictions experimentally.

Our first foray into the field is to use steered molecular dynamics to pull apart the two proteins in a complex several dozens times and calculate the force that was required to successful separate the complex.

The curve is generated with an anchored receptor and a force applied to the viral spike protein in our test system. The plot shows the average interpolated force over the replicas with p-value for difference in maximum force in the bottom left. This work combines folks from Wilke, Ellington, and Sawyer lab. This article has been published in PeerJ and is available here.

On a whole genome scale, a direct correlation between relative solvent accessibility (RSA) of sites (amino acids) in proteins and the rate of evolution (measured as rate of non-synonymous versus synonymous substitutions) at that site was established previously here, providing a reasonable model for (relatively) neutral mutations.

Fitting the rate versus RSA curve one can find sites that differ significantly from neutrality, then, compare the predictions to the current state-of-the-art methods for functional predictions. Results from this work was published in two separate articles appearing here in Molecular Biology and Evolution and here in Philosophical Transactions of the Royal Society B.

Plot of dN/dS versus RSA using a model with an expected linear dependence builtin.Red points represent amino acid sites identified in other studies of Hemagglutinin H1. Points that do not fall between show significant deviation from neutrality. Sites above the dashed line in the preceding plots.

Past Research in the Barrick Lab

Written in C++, bpopsim, has the ability to output several useful statistics regarding organismal evolution. It may be reasonable to compare this to something like the relative frequency of simultaneously sweeping mutations in a laboratory evolution experiment.

Below are some preliminary results from my test runs with bpopsim. The genotype frequencies plot was assembled and plotted in R.

Past Research in the Sutton Lab

My master’s work, in structural biology, was completed in the lab of Dr. Bryan Sutton at Texas Tech University Health Sciences Center in Lubbock, TX. I crystallized several novel constructs of the human proteins Synaptotagmin-1 and Dysferlin; I also used fluorescence spectroscopy to measure the potential for calcium binding of each domain in the proteins.